If you’re a fan of outer space, then you’re going to love Pulsar online slot. The latest RTG release is heavy with gravitational forces where neutron wars, planets, and deep space objects collide together in an explosion of fun.

This is a 3×5 online slot featuring 20 fixed paylines and 5 reels. All symbols pay left to right. Pulsar online slot is the game without scatters, wilds and free games. But, it has two special features with increasing chances for a win. The futuristic reels are surrounded by neon blue lights and configured in a honeycomb-like structure. All the information you might need to play this slot is located in two bottom corners of the screen.

This special feature can appear randomly in any spin and will remain on screen until they explode. There are four different Neutron Stars in the game, each with a distinct ‘blast’ pattern; Neutron Star green = Left-Right, Neutron Star blue = Up-Down, Neutron Star pink = cross (Left & Right and Up & Down), & Neutron Star red = X (upper & lower Left and upper & lower Right) Each time a Neutron Star first appears, it is randomly assigned a number from 3 to 1. For each spin and for each cascading win, the number in the countdown will decrease by 1. 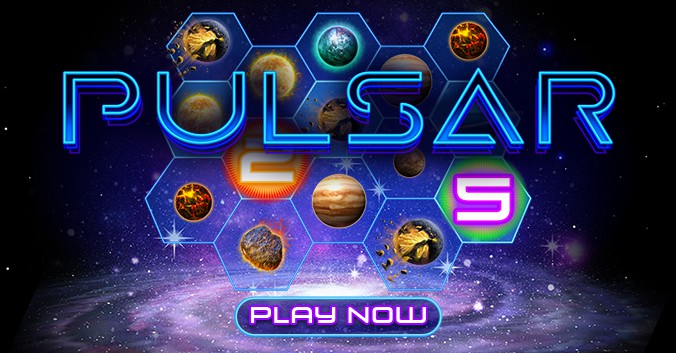