Is there anyone capable of beating Caesar? Well, actually, there is. Enter Pete, one of our lucky players. Caesar’s Empire win at Casino Brango is the topic of the day thanks to him. When it comes to progressive slots, players need to man up and be risk ready. Caesar’s Empire is an RTG slot, interesting enough to attract anyone to try. History lovers, adrenaline fans, welcome to bet safe Casino Brango!

In order to activate the Free Games Feature, the player needs to be resilient and patient. Namely, Caesar’s Empire awards 10 free spins that trigger in a very special moment. The player needs to act as if making a puzzle.

Set in the Roman times, this is a 5-reel, 20-payline slot. Players get to choose on how many paylines they wish to play. It is a historically themed slot featuring free spins, big scatter wins, and lavish wilds.

As this slot depicts Roman times, players will deal with historical characters, such as Caesar or Cleopatra. Additionally, there are ancient symbols such as Coliseum, the Trojan Helmet, a Sword and a Shield, etc. Also, the standard poker card 9 through Ace symbols. Quite enough symbols to make Caesar’s Empire Win worth your while.

Caesar is the Wild symbol and substitutes for all other symbols except for the Scatter, when forming a winning combination. The Wild appears on the reels 1, 2, 3 and 4. Caesar can triple the prizes, while 5 Caesar symbols can award you with 2500 coins.

On the other hand, Coliseum is the Scatter symbol. One or more Scatters appearing on the reel 5 reward players with Free Games Feature. Scatter wins also multiply the total bet.

Apart from the Caesar and the Coliseum, this slot has another powerful symbol. Let us just say that 5 Cleopatra symbols award players with 2500 coins.

We mentioned above that in order to activate the Free Games Feature, the player needs to score Caesar Wild symbol at the same time when the Coliseum Scatter lands on reel 5. This is when 10 free spins are awarded. Moreover, the prizes here multiply 2x. However, this is not the end of a story in a Caesar’s Empire Win.

Players can re-trigger Free Spins for each Caesar symbol appearing during the Free Spins Feature and players receive 5 extra Spins.

While you keep enjoying the Free Spins Feature, all Scatter Coliseum symbols change to either the Wild Caesar or the powerful Cleopatra.

Caesar’s Empire is a slot with a progressive jackpot. It awards randomly at the end of each spin, regardless of the spin bet. Make sure to always check the current jackpot on top of the reels.

Meet the Caesar and share his spoils of war! 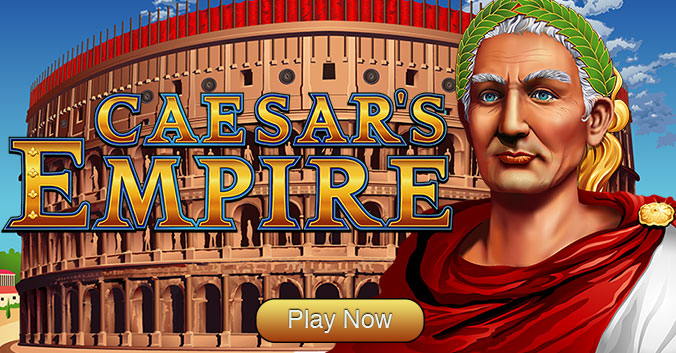