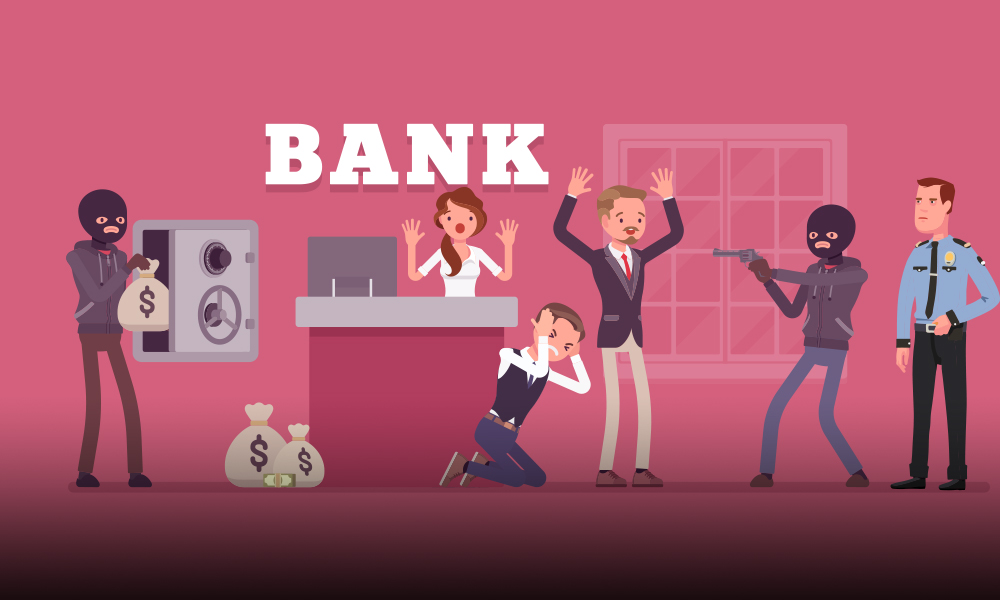 Approaching the Labor Day, a group of thieves gathered to plan the heist of a local bank. With all worker accolades aside, they realized that as much as they tried to work honorably, they have never been able to step out of the ordinary lives they led. Therefore, they planned a heist. The situation unfolded quickly under the watchful eye of the media. Our Investigator came to the scene to negotiate. One thing puzzled him. He could not realize in what way the thieves entered the bank. Get Labor Day free spins for helping our Investigator to solve a crime. 50 FREE SPINS are within your reach!

The Beginning of the Heist

It was a sunny September morning and no one entering the bank could have guessed what was about to happen. People were waiting in lines in coffee shops, to get their morning dosage of sobriety. Others were having breakfast in a nearby diner. Taxis struggled through traffic jam.

And at the corner of the street that is in our focus today, there was a TV station van parked. The journalist and cameramen gathered to take the best possible angle to shoot and report. They were interviewing the witnesses in the street and most of them said that they did not notice anything unusual.

The first clue that something terrible was happening was the sound of gun shots coming from inside the bank. The Investigator figured that since the robbers did not use a bomb to create a blast as a distraction or to enter the bank in grand style in broad daylight, they must have planned this for a long time.

Pieces of the Puzzle

The heist mastermind who called himself Storm got in touch with the lead Investigator and informed him of the situation inside. Quite unusually, he was co-operative and spoke calmly about holding hostages: security guards, several bank clerks among whom there was a Bank Manager and a few clients. He seemed confident the police could not touch him. After hours of talk, the Investigator gathered the following information:

What Did the investigator concluded?

The first thing that came to the Investigator’s mind was that the robbers may have entered the bank as regular clients and then found weapon hidden in a bank by their accomplice. The problem with this agenda was the fact that the security cameras at the entrance would have scanned their faces, so he thought this was the least likely option.

Then, he thought that the robbers entered the bank in some other way, through a secret passage of some kind, carrying the weapons.

The third possible answer is the above 2 combined, but at this point, the police were more interested in the way the robbers entered the bank than if there have been any accomplices.

There were no demands whatsoever.  This was perhaps the most surprising fact. The Investigator figured that since they were not making any demands, they must had worked their way out carefully. He supposed that they would walk out the same way they entered. If only he knew in what way they managed to do that imperceptibly.

Guess in what way the robbers entered the bank and get Labor Day free spins!