What makes a good casino streamer? And why do people watch casinos in the first place? How can you become a casino streamer yourself? Maybe by playing at instant withdrawal Casino Brango? Can we make the list, ranking the best casino streamers? And why are there so many Swedes on the list? The answers to all these questions await you in this article.

Why are casino streamers so popular?

The casino streaming phenomena started in 2015 with he that shall be named (Roshtein). It didn’t pick up steam until 2019 with likes of Trainwreckstv and xQc (not on the list though, he quit ). So why did it become so popular in the first place? Well, it appears to be a combination of at least two factors. One being Twitch’s growing popularity and the other – human psychology: people like success stories. Plain and simple. And both of these things probably won’t change anytime soon.

Now, what makes a good casino streamer? Some say it’s an interesting personality, ability to entertain and be relatable. While all of those might be good guesses, none of them is quite right on the money. They all are missing one thing. A Swedish (or birth certificate more like) passport. That’s right, ladies and gentlemen. Welcome to the swede-o-meter 2021. The streamers will be graded in an additional special category: SWEDNESS!

Now then, casino streaming has been hitting it big since the beginning of last year. It also probably peaked right about July this year just before THE CONTROVERSY. So how has the landscape changed? Who are the mainstays and who are the newcomers? And most importantly why are there so many Swedes gambling and living in Malta? Let’s begin.

While only starting streaming in 2020, his connection to Roshtein (later on the list) has bought him some street cred. Now for are swede-o-meter. It’s strong 3. While born in Poland he has grown up in a typical middle-class Swedish family. Also majored in finance and is very polite. But I had to knock some points off because of the fact he is not living in Sweden. Actually, we don’t know where he lives (probably Malta).  Mysterious. That’s enough in my book. 3 points for you, Sir.

Now, the gambling. He amassed a total of 2,081 hrs played on slots in the last year. Nothing to scoff at. But even more impressive is how much he won while playing. One time he managed to pull an amazing 485.000$. Waouh! That’s a lot of money.

A Canadian. Why I never… 2 points on the swede-o-meter. Why not 0 or a 1? Well, he’s Canadian, which by default makes him polite. And Cody (his name) is a regular of Joe with a baby and a fiancé.  Nice guy. But I hear you again saying what about the gambling? We don’t want to hear another word of your conspiracy theories about Swedes controlling the gambling world. Fine.

He has played an incredible 3,317 hours slots in the past year. His biggest win was an incredible $500,000, quite impressive. What a nice fella!

First, a Canadian and now a whole boatload of America! The swede-o-meter won’t like this one bit. Yep, a 1. Well, they are polite and try to promote gambling as a non-shady fun past-time. They do this by not affiliating with any shady casinos and taking fake money as they say. A whatever 1.5. On the numbers-side, things look like this. Total slot playtime is an astounding  12,672 hours (he’s been doing this for a long time). On the biggest win front, we got a crazy $528,800! Hot damn!

Where are the Swedes? I am getting desperate and it’s nothing to laugh at. Teuf? O YEA, the truck driver French dude. France and Sweden are bordering each other if you squint real hard. Yap, we are rolling with that. So the swede-o-meter says 2.5. Okay. He has blue eyes. That’s Swedish, I guess. Oh, but I hear he isn’t very polite (I don’t know, I don’t speak French). I’ll just pretend he is educating his viewers on the proper bon-ton and we are keeping the 2.5.

We continue with the French theme but with a gentler twist. Two gals (Heidi and Virginie), friends since they were 15 and streaming slots since 2015. Warms the heart. Not as popular as many of the top dogs on this list, they are on it for the sheer amount of hours played. 11 885 hrs. I am going to reap myself. 11 885 HRS! The only thing holding them back is their low top win numbers ($21 991), nonetheless, I salute you girls. The whole cause of casino streaming salutes you.

Finally, the Swedes have arrived. Consisting of three brothers, Karl Anton (32), Erik (28), and Mathias Joelsson (34). And man, the swede-o-meter is going wild. This is a max, I believe. The lads are getting a 5. I mean just look at them blond as hell and listen that sweet Swenglish which comes pouring. Also, they have lived in Kristianstad (Sweden!) since their birth. Also very polite. A 5/5.

But what about the streams? They have streamed for 2016 regularly and have perfected the art of freaking out when winning big. Their biggest win was  $194,416 with a measly $4 initial bet. And ah, my God, 20,375 hrs played!!! Enough said. Keep fighting the good fights, Lads.

My hero. He has come to rescue my Swedish casino conspiracy theory. Yes, it’s the original meatball eating but probably not ( with the kind of money he’s winning) the Ikea buying machine. The myth, the legend, Roshtein. What does the swede-o-meter say? A 4. Let me check this. Swedish born. Check. Swenglish. Check. Lives in Sweden. Lives in Sweden. Wait, he lives in Malta. Well, I’ll take what I can get.

Let’s see what the newcomers have to offer. UUU, a Lebanese streamer born and raised in South Africa. Time’s are a-changin’. He is no Swede, that’s for sure. But the fact that he provides the links to his cryptocurrency account is a major plus in my book. OK. let’s do the numbers. Hours played: 2,772. I mean that’s expected from a newcomer. Wait a minute, what is this  $1,000,000 win from the newcomer? Jesus! Kids these days… am I right?

Our first English speaking female streamer. And from New Zealand no less. Times really are a-changing. Fun fact she also went on the X-factor. Her number is not that unimportant (149 hours and sub $50k winnings, still not your average joe). But what is important is her growing influence in the streaming scene and her transparent relationship with the casinos.

There it is again. They thought I wouldn’t notice. It’s another Swede. The conspiracy lives! Joking aside, he appears to be good friends with DeuceAce (who is friends with Roshtein, it all makes sense now!!!). I’ll stop. This appears to be the last Swede in this article. So let’s see what his numbers say. Nice a healthy 1,586 hrs. And an equally healthy €126,500 ($147,182.12)

Where Swedes lead, the French are soon to follow as we learned from above. This young French man is an overnight phenomenon amassing 150k followers on Twitch in just 2 years. The same as the rest of the newcomers, Bidule mixes a lot of other games ( e.g. CS: GO).

Did you know that Trainwreckstv holds a bachelor’s degree, in Analytic philosophy no less? Now that’s an interesting fact. Almost as interesting as the fact that he was the 2nd most viewed streamer during the 2020 Presidential Election. He Even beats Roshtein (and everybody else) in every category we listed so far. By how much? By A LOT! The numbers (23k avg. viewers, 3,239 hrs played and a WHOPPING  $3,060,000, win) he might have a reputation for being a bit of… But the numbers don’t lie. Trainwreckstv is on the top.

Casino Streamer is Playing With Fake Money (The Controversy)

Now you might have deducted from the title above what the controversy we were speaking of is about. So, let’s break it down. The first to crack was Roshtein. He got caught when he entered from real play to free mode and his account balance didn’t change. Next up was Xposed. In 2020 there’s a clip of him playing and his balance changing by 25k out of thin air without him doing anything or even batting an eye. Most, if not all streamers on this list play and have played with fake money.

So, now everyone is putting a disclaimer in the description stating that they are playing with casino money. Those that make it better? Well, that depends on your preference. Do you prefer the real thing grinding away at small sums once or twice a week? Or something more alike to WWE, fake but bombastic and large, appreciated for its spectacle if not for its authenticity.

Woah there, partner. Where do you think you are going? Aren’t you forgetting something? There’s still one question left unanswered. So how can you become a casino streamer yourself? Well, the answer is pretty simple: record yourself playing games at an online casino, duh. Might I suggest you playing some Cash Bandits 3 to get you started? Have fun! 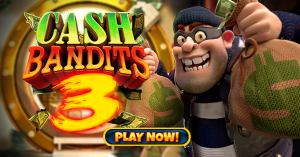