Slots are definitely the most popular betting games. They vary in theme, but a common thing for all of them is luck. There is no hack or trick that you can learn to help you cheat a slot machine. So, you must have faith in your abilities as well as good fortune. This post is going to focus on the type of slot game that is called fruit slots. More specifically, today we are bringing you the best fruit slot machines played in 2021!

Fruit Bowl XXV is a slot game that is a mix of fruit and sports. The game is, somehow, both fruity as well as athletic! How is that possible you would wonder? Well, quite easily! Developers wanted to make a mixture of the classical fruit slot and the American football, and they have succeeded! I mean, the game is on our list of the slot machines that were the best ones during the past year and that should say something.

Now, let’s find out more about the game. Fruit Bowl XXV has 25 variable paylines with multiple and random jackpots. The jackpot cannot be grouped with a minor reset amount of $250, while the major is $1,000 (expressed in USD and can vary for other supported currencies).

When it comes to the symbols, the scatter symbol of the game is Fruit Bowl XXV. On the other hand, the substitute symbol is grape. All these symbols are animated which makes the whole game extremely interactive and fun. To add, grape substitutes every symbol except Fruit Bowl XXV. Wins with scatter wins are joined to the line wins, and they are multiplied by the total bet. Also, except scatter symbol, all the other pay left to right.

“Fruit Bowl XXV” feature is triggered when 3 or more scattered symbols appear on your screen and for the start, players are awarded 5 free games at a multiplier of x1. By activating this feature, the player dive into the football storyline as well as the football field. The player tries to bypass up to 4 opponents in succession on the way to a touchdown and has an opportunity to select the movement versus each opponent in turn.

If the opponent evades the player, he gets awarded 5 extra free games and an opportunity to increase the free game multiplier by 1. Contrary, if the player is tackled the feature ends. Also, any retrigger of this feature will add 5 games to the current one. Each of these free games will be played at the lines and bet of the triggering game.

The win-win bonus feature is triggered when 25 lines are being played. Also, it is active only at the end of the free games feature, but when the overall free games win totals 10 times the triggering bet or less. Wins of different heights give different bonus prizes, but all of them depend on the initial bets that were made. 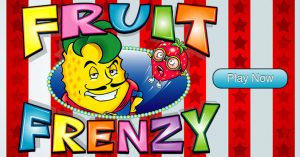 Another great fruit slot machine in 2021 was Fruit Frenzy. If you are the person who isn’t a fan of the fruit, this game is going to change your mind. We don’t like to keep our players waiting, so stay with us and find out why!

Fruit Frenzy consist of 25 lines. The progressive jackpot is an extra feature of the game and is triggered randomly and added to all other wins. It can be won at the end of any game and the reset amount is $1000 (expressed in USD and can vary for other supported currencies). The wild symbol of the game is a pineapple, and it can substitute for all the other symbols except scatter ones. Scatter symbols are “Fruit” and “Frenzy” logos.

We suppose that all of you want to know first how this bonus feature is triggered. Well, the “Daredevil” feature is a type of free games feature that is activated when any 5 of a kind line win occurs. Every time player achieves this, he gets an extra round of the “Daredevil” craziness.

This feature can be best described as a real circus. A lot of colors and shooting make “Fruit Frenzy” a hugely dynamic slot game. For example, players have an opportunity to shoot the daredevil strawberry through a rock-melon target in each round.

They have three attempts to do it and for each successful shot, one point is awarded. Yet, the “Daredevil” feature is awarded from the total points and can be retriggered. Also, free games characteristic is played at 25 lines. To add, what activates the game is a bet per line. During this feature, line prizes are doubled, and scatter prizes are tripled.

May the luck be with you as we will be expecting to see you play our fruit slots in 2022 also!