Even if you’re not spending much time online, you’ve probably participated in a meme trend, knowingly or not. Maybe you drink coffee from a “Keep Calm” cup at work, or you tried the Ice Bucket Challenge couple years ago. Memes are part of our lives now and for casino players like you, nothing is more interesting than seeing familiar casino scenarios played as a joke online. Take a break from playing games and have fun with these funny gambling memes we’ve chosen. 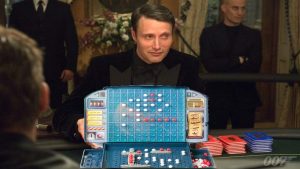 One of the most iconic moments in Casino Royale has become very popular meme.

The scene in question is played by Daniel Craig who was almost poisoned. Le Chiffre, the movie’s villain, spiked his drink, almost killing him. Agent 007 then comes with a punchy line: “Oh, I am sorry. That last hand nearly killed me.”

This scene has become a meme and it refers to photoshops and jokes imagining Le Chiffre playing games other than poker such as Monopoly and Uno. 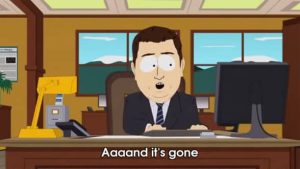 This is a picture of a bank teller from the animated television show South Park. The image often contains captions describing lost opportunities or items, ending in phrase “And it’s gone”.

A character for this legendary show hands over the banknote to the bank cashier. He enters it into the system and decides to invest it and – the money is gone. The cashier spends a few seconds on his keyboard before announcing “… aaand it’s gone” to a Stan who has just lost his money.

While the scene has little to do with actual gambling, it’s a funny way to remind yourself how risking your money can have serious consequences.

After his one-year suspension from the NFL for betting on NFL games was announced, American football player Calvin Ridley reacted to suspension on his Twitter account. “I bet 1500 total I don’t have a gambling problem” Ridley tweeted before noting that he “couldn’t even watch football at that point.” 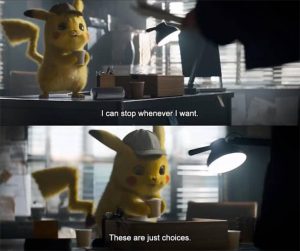 In one scene, Pikachu is holding a cup of coffee and he is saying “I can stop whenever I want. These are just choices.”

Even though it is related to coffee we can say it is also a gambling meme because sometimes we exaggerate when it comes to playing games of chance. This is a little reminder that we need to be more responsible to our money and invest it smartly. 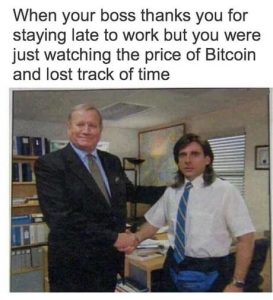 For the end, let’s give a shoutout to, I’m sure, a favorite show to many of you. A legendary scene where young Michael Scott is shaking his former boss’ hand is a memorable moment. People have used the image to express feelings of meeting an elder when they were young. We won’t explain the meme further to you, we are sure you get the joke.

There’s an endless variety of memes, covering everyday topics and world events. More are created and shared every day, and new material is constantly available.

If you are inspired by an image or a video you come across, make your own meme. We hope you liked some of these and that it made you laugh. Give us your favorite memes in the comments bellow. Until then, visit crypto casino Brango and make some great wins! Good luck!